Brave, Pride, Come Up with Big Wins During Week 4

WPLL fans were treated to more exciting action last evening, as the Brave and the Pride turned in convincing wins in front of a packed Ridley Athletic Center, filled with youth players participating in the nearby MidAtlantic Tournament. Midfielders Marie McCool and Haley Warden each willed their teams to victory. In impressive performances,  McCool tallied 5 points (4G, 1A) and won 6 draw controls while Warden won a WPLL record 11 draw controls to go along with 2 caused turnovers and a two point goal. 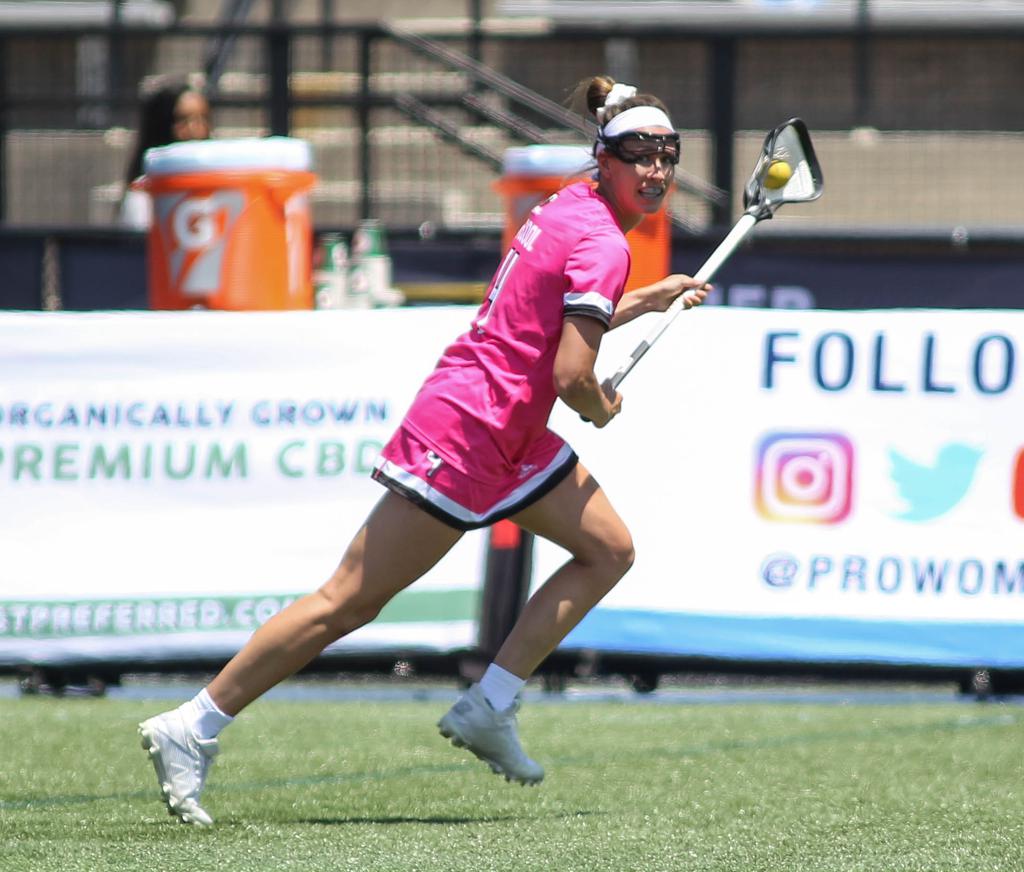 In a rematch of the 2018 WPLL Championship game, 2018 WPLL MVP Marie McCool immediately kicked things into high gear after winning the opening draw and scoring unassisted at the 14:23 mark. Brave teammates Dana Dobbie and Cortney Fortunate (assist to Dempsey Arsenault) followed up with goals of their own at the 13:17 and 10:41 marks, giving the Brave an Early 3-0 lead. The Command’s Penn State grads struck back though, with Steph Lazo scoring her first goal of the season at the 2:43 mark and Katie O’Donnell scoring her third goal of the season at the 1:25 mark.

Entering the second quarter up 3-2, the Brave started to pull away from the Command. McCool again kicked of the quarter’s scoring, tallying her second of the day off a free possession shot at the 14:05 mark. Down 4-2, the Command’s Samantha Nemirov took matters into her own hands, driving to the cage and scoring an unassisted goal at the 12:31 mark. Brave captain Dana Dobbie prevented the Command from picking up momentum, scoring her second goal of the day at the 9:28 mark, with the assist going to fellow Maryland graduate Brooke Griffin. Not to be outdone, Nemirov scored unassisted yet again at the 6:56 mark, again cutting the Brave lead to one. McCool fired back by winning the resulting draw and dishing it off to Dempsey Arsenault. Arsenault then fed McCool for her third goal of the day. Down 6-4, Command attacker Kenzie Kent scored what would be the trickiest goal of the game, converting an unassisted twizzler shot and cutting the Brave lead back to one with 2:16 remaining in the quarter. But the Brave would not end the quarter quietly, as Fortunato was about to take over. The Notre Dame graduate scored her second of the day at the 1:10 mark, with Arsenault tallying her second assist of the day. Fortunato then scored again with just 0:04 on the clock, bringing the Brave lead to 8-5 at the end of the first half.

Fortunato’s early hat trick gave the Brave some security going into the second half. And after an initial lull in scoring, Arsenault and Griffin continued to build the Brave lead, scoring at 12:33 and 10:20 respectively with McCool assisting on Griffin’s goal. With the Brave starting to pull away, O’Donnell wove through the Brave defense and scored unassisted at the 8:56 mark, bringing the score to 10-6. Fellow 2018 graduate Kristen Gaudian found the back of the net next, with Dempsey Arsenault tallying her fourth assist of the game. With time for a comeback running out, Command captain Kaia Mupo stepped up and scored her first of the day, bringing the score to 11-7 at 6:29 (assist Kent). Brave midfielder Amanda Johansen finished off Q3 scoring with an unassisted goal at 2:49.

Entering Q4 with a 12-7 lead, the Brave were about to see the Command stage a comeback filled with a flurry of quality shots. Luckily Brave keeper was ready for them, tallying 3 saves in the quarter. The Command started Q4 scoring with the Penn State connection striking again, this time with Lazo assisting O’Donnell at the 13:45 mark, bringing the score to 12-8. Hicklen then faced impressive shots from the likes of Kent and Mupo, but for the next six minutes was able to keep the Command off of the board. Attacker Kara Mupo eventually scored again at the 7:05 mark, bringing the score to 12-9. Feeling the Command’s momentum growing, the Brave called a timeout, which effectively iced the Command. With 3:56 remaining McCool scored her fourth of the day, sealing the Brave win (13-9). 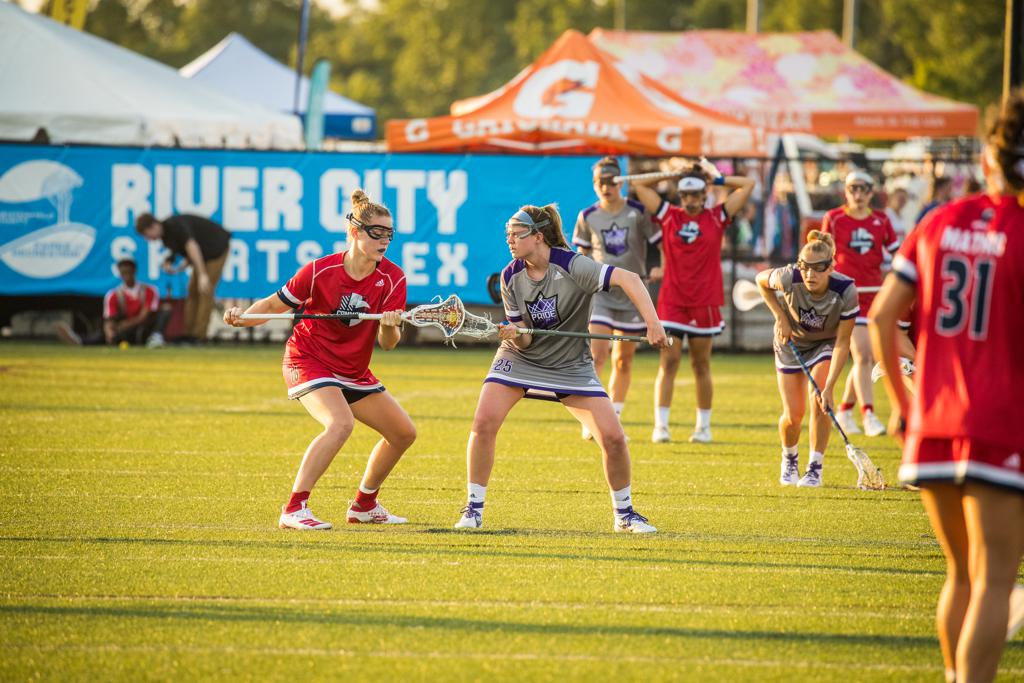 In a heated battle between the Pride and the Fire, it all came down to possession. And with a WPLL record 11 draw controls, 2018 James Madison University graduate Haley Warden virtually willed her Pride team to victory. The Pride won 18 draws (Warden 11, Carey 3, Fredericks 1, Tracy 3) while the Fire won just 10 (Maddie Crutchfield 3, Hannah Nielsen, Taylor VanThof, Katie Haus, Maggie Jackson, Francesca Whitehurst, and Kelyn Freedman with 1 each), giving the Pride several more opportunities to convert.

The Pride exploded  with an initial offensive flurry, going up 4-0 in the first 7 minutes en route to a 7-2 lead at the end of Q1. Halle Majorana kicked off the Pride’s offense, scoring her second 2 point goal of the season at the 12:47 mark. Majorana struck again at 10:54, giving the Pride an early 3-0 lead. These were Majorana’s only shots of the game, and she converted on each of them. The Pride’s first overall draftee Ally Carey added to the Pride lead at the 8:13 mark, finishing a shot with the assist going to Fredericks. At the 6:34 mark the Fire got on the board behind an unassisted goal from Hannah Nielsen. This would be the first of many for Nielsen, who almost single handedly powered the Fire’s offense. Up 4-1, the Pride continued to grow their lead with goals from Mollie Stevens (assist from Danielle Etrasco) and Etrasco (assist from Olivia Home). Kelyn Freedman responded at the 2:52 mark, scoring her 4th goal of the season with the assist going to Michelle Tumolo. With the clock ticking down Pride midfielder Sydney Pirreca would close out scoring, giving the Pride their 7-2 lead. The Pride were able to fuel their offense directly from the draw circle, as they won 7 draws in Q1 opposed to the Fire’s 2.

The Fire started heating up in Q2, opening the door for an exciting match. Playing on her college home field, 2019 Loyola graduate Taylor VanThof scored her first of the day at the 13:50 mark. SammyJo Tracy would respond for the Pride, scoring consecutive goals at the 12:50 and 10:45 marks. But Tracy’s goals would be the only points the Pride recorded all quarter, as the Fire would stage an impressive four goal run to end Q2 (Hannah Powers from Tumolo 8:53, Maggie Jackson from Nielsen 5:57, Powers from Nielsen 4:27, and Nielsen unassisted 0:06). 2x Tewaaraton winner and 4x NCAA Champion Nielsen had a particularly impressive quarter, leading the Fire to a 5 goal quarter and cutting the Pride lead to 9-7.

Quarter 3 proved to be a defensive battle. After an initial flurry of goals, Fire keeper Gussie Johns and Pride keeper MollyWolf put on a goalie clinic, with Johns turning away 5 shots and Wolf turning away 2.  Even with the stellar goalkeeping, each team was able to find the back of the net twice in quarter 3, with Nielsen and VanThof scoring for the Fire and Etrasco and Fredericks scoring for the Pride.

Up 11-9 going into the 4th, the Pride hoped to grow on their lead and secure the victory. Pirreca stretched the lead to 3 at the 14:49 mark, but Nielsen trimmed it back down to 2 with a free possession goal at 12:31. 2x Tewaaraton winner Katie Haus cut the Pride lead to 1 with her goal at 9:38, but that would be the closest the Fire would come to victory. Fredericks and Stevens scored at 8:22 and 6:40, bringing the Pride lead to 14-11. Freedman scored her 5th of the season at 2:21, but Warden sealed the Pride win with her 2 point goal at the 0:04 mark. In the loss Nielsen tallied 7 points on 4 goals and 3 assists.

About the Women’s Professional Lacrosse League

Founded in 2017 by 4x All-American, and two-time World Champion Michele DeJuliis, the WPLL is a professional league made up of 125 of the top post-collegiate female lacrosse players in the world and a youth development league connecting with the top high school players in the country. For both our professional and our youth players, the WPLL prioritizes character development as a means to excel in life on and off the field. The WPLL uses lacrosse as a vehicle to provide girls with skills that allow them to not only become better athletes, but also grow into confident and brave women. Thanks to a partnership with ESPN, in 2019 fans can tune in to all regular season WPLL games on ESPN3 and the Championship on ESPNU. For more information, visit prowomenslax.com, and follow on social media: