WPLL Playoffs Set: Semis on 7/26 at Yale University, Finals on 7/28 at US Lacrosse Headquarters (Sparks, MD) 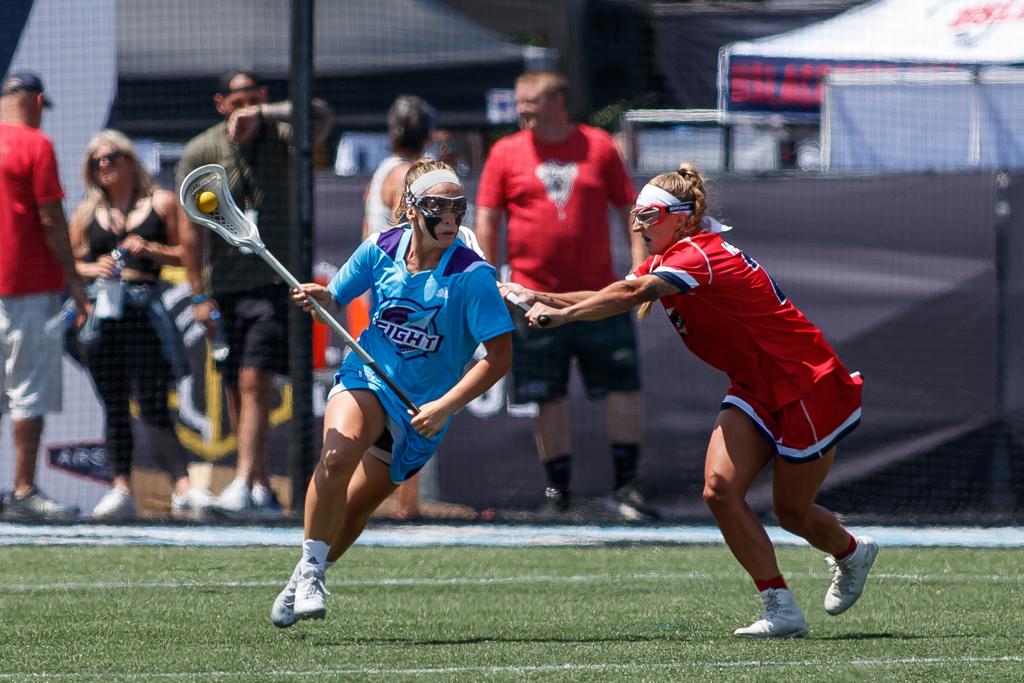 The WPLL is pleased to announce the 2019 Post-Season Schedule. At the conclusion of the regular season the top four WPLL teams will travel to Yale University’s Reese Stadium (New Haven, CT) on July 26th to play in the semi-finals, with the two winners moving on to the 2019 WPLL Championship game at US Lacrosse Headquarters in Sparks, MD on July 28th. Tickets to the semi-finals can be purchased here, while tickets to the final can be purchased here.

With one weekend of regular season games remaining, mathematically the top four teams in the league are the Fight, Brave, Pride, and Command, meaning that they have each qualified for the semi-finals at Yale University. At 3-0 the Fight have secured a #1 overall seed, as even a loss against the Fire on 7/20 would see them remain in first place. At 1-3 the Command have locked up the #4 seed, and at 2-1 the Brave and Pride will be playing this weekend, with the winner earning the #2 seed in the post season while the loser receives #3. This means that at the semis the #1 Fight will face the #4 Command, and the #2/#3 Brave/Pride will face off with the winners moving on to the championship.

The WPLL Semi-Finals at Yale Reese Stadium will take place at 4:30pm and 8:00pm on 7/26. The Semi-Finals will be held in conjunction with the 2019 WPLL Futures Summit, the WPLL’s youth development program designed to help today’s top high school lacrosse players develop on the field and off. This means that all players selected for the Futures Summit have the opportunity to attend the semi-finals and see the game played at the professional level.

“We are absolutely thrilled to have our Futures players join us for the semi-finals,” explained WPLL Commissioner Jen Adams. “The Futures Players are the next generation of talent in our sport and many of them may someday take the field as WPLL players. We look forward to showing them all just how far the game can take them.”

After the conclusion of the semi-finals the winning teams will travel to US Lacrosse Headquarters Tierney Field on July 28th to play for the 2019 WPLL Championship at 2:00pm. The Championships will return to Tierney Field after an exciting 2018 Championship where the Command edged out the Brave 12-11 on a last minute goal by attacker Aly Messigner. This season the Command hope to repeat as WPLL Champions, but the Brave, Fight, and Pride will all be fighting for the crown as well.

“We are excited to bring the 2019 WPLL Championship back to Tierney Field. Tierney provides our players with top-notch facilities as well as the honor of playing at US Lacrosse Headquarters, a venue that is familiar to many of our athletes. We had an incredible experience at the 2018 WPLL Finals, and we plan to continue the magic this summer,” explained WPLL Director of Player Relations Devon Wills.

The semi finals games will be streamed live on ESPN3 and the 2019 WPLL Championship game will also be broadcast on ESPNU, giving fans across the country the opportunity to tune in and see lacrosse played at the highest level. All lacrosse fans are welcome to join the WPLL’s top teams at the post season games. Reserve your tickets today!

About the Women’s Professional Lacrosse League

Founded in 2017 by 4x All-American, and two-time World Champion Michele DeJuliis, the WPLL is a professional league made up of 125 of the top post-collegiate female lacrosse players in the world and a youth development league connecting with the top high school players in the country. For both our professional and our youth players, the WPLL prioritizes character development as a means to excel in life on and off the field. The WPLL uses lacrosse as a vehicle to provide girls with skills that allow them to not only become better athletes, but also grow into confident and brave women. Thanks to a partnership with ESPN, in 2019 fans can tune in to all regular season WPLL games on ESPN3 and the Championship on ESPNU. For more information, visit prowomenslax.com, and follow on social media: