In games decided by possession in the draw circle, the Fight and Brave earned convincing wins, securing their spots in the 2019 WPLL championship game. The Fight’s Taylor Cummings (2G, 1A, 3GB, 11 DC) and the Brave’s Marie McCool ( 4G, 11 DC) both tied the WPLL record for draw controls in a game while leading their teams to victory, setting the stage for a battle at the draw at the 2019 Championship game. Sunday's WPLL Championship game will take place at 2:00pm ET at US Lacrosse Headquarters in Sparks, MD, and will be available to watch on ESPNU. 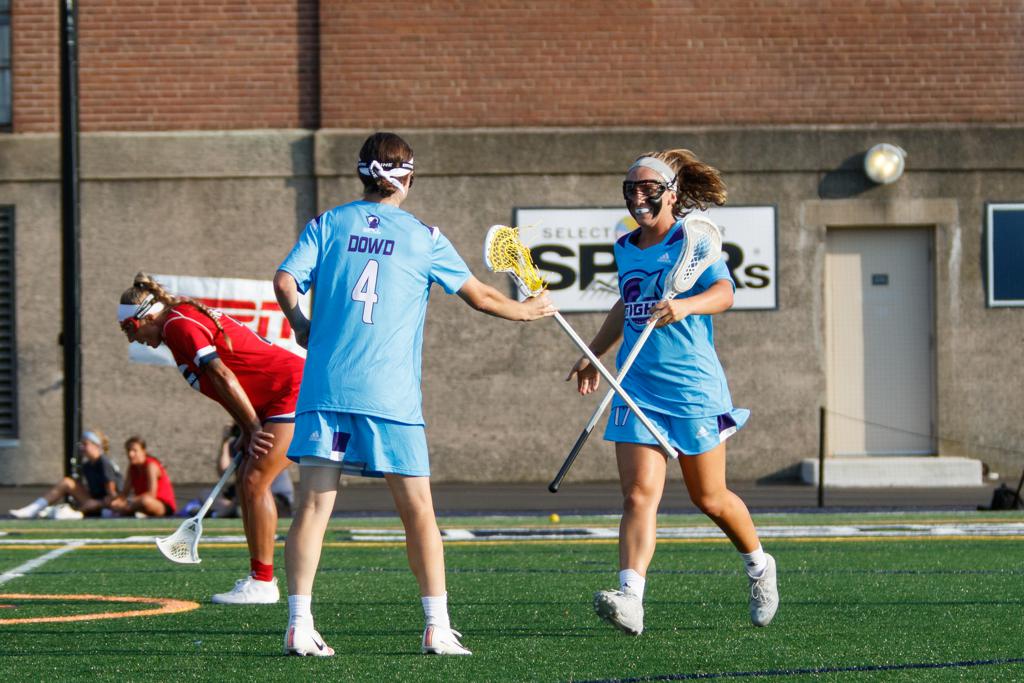 Playing in the first semi final, the Fight faced a back and forth battle with a talented Command team. Command captain Kara Mupo struck first at the 1:43 mark, scoring her 5th goal of the season. The Fight rookie duo of Florida grad Lindsey Ronbeck and BC grad Sam Apuzzo struck next, connecting for a Ronbeck goal at 2:50, tying the game 1-1. Moments later Command midfielder Kristin Igoe put the Command back up 1, scoring a beautiful goal with the assist going to Samantha Nemirov. Apuzzo followed up at the 3:23 mark with a goal of her own, bringing the score to 2-2. Strong defense from both teams led to a standstill, and it would be another 7 minutes before either team would score again, with Command midfielder Katie O’Donnell breaking the scoring drought at the 10:45 mark, brining the Command up 3-2. Just twenty seconds later Apuzzo found a streaking Cummings, who buried the shot and tied things back up 3-3. Fight attacker Kayla Treanor finished the Q1 scoring, slipping a free possession shot past Command keeper Bridget Bianco and giving the Fight a 4-3 lead heading in to Q2.

The second quarter was a defensive battle highlighted by stellar play by Bianco and Fight keeper Megan Taylor. Bianco tallied 4 saves in the quarter, while Taylor tallied 3. And these weren’t just any saves. The Fight attack lineup of Apuzzo, Kylie Ohlmiller, Treanor, and Katrina Dowd came at Bianco hard with creative shots, but Bianco held her ground and came up with incredible saves. Apuzzo finally found the back of the net at 6:13, converting an unassisted goal and making the score 5-3 Fight. Another rookie duo struck again for the Command at 8:21, with 2019 Dartmouth grad Kierra Sweeney scoring her first of the day with the assist going to 2019 BC grad Kenzie Kent. Up by 1, Apuzzo and Treanor connected for a beautiful goal at 9:22, with BC coach Treanor feeding BC grad Apuzzo, giving Apuzzo a first-half hattrick. Fight attacker Katrina Dowd closed out the first half scoring, finishing the Fight’s 2 goal run and giving her team a 7-4 lead. Cummings dominated the draw during this quarter, winning 3 of the 4 draws.

Hoping for a comeback, the Command got just that in Q3. Starting with three straight goals from Kasey Behr (assisted by Taryn VanThof, 1:43), Kent (2:29), and Nemirov (5:17), the Command quickly erased their 3 goal deficit and brought the score to a tie, 7-7. Katrina Dowd put out the Command’s scoring streak at 8:18 with an unassisted goal of her own (8-7 Fight), but the Command continued to carry their momentum on, scoring two more goals to close out the quarter (Tanner Guarino on a free possession, Taylor Hensh unassisted), giving the 4 seed Command a 9-8 lead heading to Q4.

With a trip to the Championship on the line, the Fight secured their undefeated record with their stellar Q4 play. The #1 seed Fight won 5/7 draws in Q4, winning possession and eventually winning the game. Ohlmiller came out hot in the fourth quarter. Previously held pointless, Ohlmiller found an open Taylor Cummings at :43, earning her first assist of the day and making the score 9-9. At the 2:08 mark Ohlmiller struck again, tallying her second assist of the day after feeding Apuzzo, who scored her 4th. Rookie Ronbeck struck next, with the assist going to Cummings. Down 11-9, Command midfielder Taryn VanThof scored at the 8:35 mark, bringing the score to 11-10. But that was as close as the Command would come to victory, as Treanor and Dowd would each score goals securing the Fight victory.

This loss means the end of the Command’s season. Bianco led all keepers with 9 saves while 2019 Yale graduate Izzy Nixon led the Command with 4 draw controls while playing on her college home field. 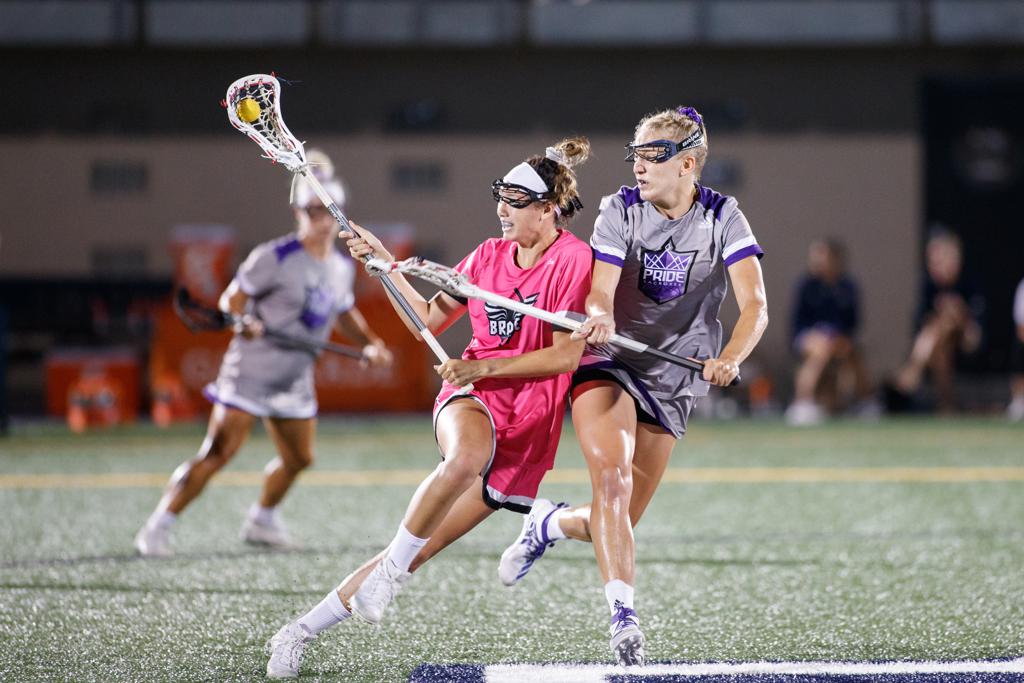 In the second semi finals game the Brave came away with a 15-10 victory. What started as a back and forth battle in Q1 eventually led to a 10-3 Brave lead before the Pride were able to put together their comeback. Both teams were at a defensive standstill until 6:46, when 2019 Maryland graduate Erica Evans struck first. It was Evans first goal of her WPLL career, and it put Evans and the Pride up 1-0. Marie McCool fired back, scoring two goals of her own at 8:45 and 14:28, bringing the score to 2-1 Brave. Brave defender Tianna Wallpher was excellent throughout the first quarter, blocking a shot, causing a turnover, and playing tight defense that led to frantic Pride play. Her influence was felt all over the field, as her quick clears kept the Pride defense on their toes.

The Brave dominated the second quarter, as it eventually gave them enough of a cushion to secure the win. Pride midfielder Haley Warden struck first at 1:14, making the score 2-2. Warden’s 2018 James Madison teammate Kristen Gaudian scored next for the Brave at 2:56, putting the Brave up 3-2. Pride attacker Sammy Jo Tracy tied things up at the 5:49 mark scoring off an impressive midrange shot. Tied 3-3, the Brave would then go on a 7 goal run that would head into the third quarter. Cortney Fortunato, Dana Dobbie (2), Amanda Johansen (2), Alyssa Leonard, and Marie McCool each found the back of the net, with Gaudian (2) and Fortunato also tallying assists. Evans stopped the Brave run at the 5:20 mark in Q3, with the assist going to Mollie Stevens. But the Brave followed up with two more goals from Leonard and McCool, bringing the score to 12-4 at the 12:28 mark. Pride attacker Sydney Pirreca beat the clock at the 14:40 mark, sparking some hope for a Q4 comeback.

At the start of Q4 Gaudian scored her second of the game giving the Brave a 13-5 lead. Sammy Jo Tracy followed up with her second of the day off of a crafty bounce shot, trimming the Brave lead to 13-6. At the 6:45 mark Gaudian finished her hat trick, giving the Brave a 14-5 lead. With 7:47 remaining in the game Pride attacker Danielle Etrasco took matters into her own hands, scoring a 2 point goal and then a 1 point goal for a three point swing that brought the score to 14-8. Elena Romesburg then scored her first goal of the season at 12:53, followed by a Stevens goal briging the score to 14-10. Fortunato closed out the scoring at 13:42, making the final score 15-10.

In the loss Pride keepers Molly Wolf and Liz Hogan each had impressive showings, with Wolf stopping 7 shots and Hogan turning away 8. Led by McCool’s 11 draws, the Brave won 17 draws on the day opposed to the Pride’s 7. Brave defender Ai Hirose earned her most minutes of the season this match, playing tight defense that stifled the Pride attack.